The shifts in composition and function of the soil biota in ARD affected soils are analyzed in detail by partners in WP2. In parallel, WP3 focusses on the reaction of apple plants to these soils. This will be essential for an understanding of the specificity and persistence of apple replant disease. Plant reactions are studied by the ORDIAmur partners within WP3 at the levels of gene expression and secondary metabolites. Within phase I of ORDIAmur we were able to demonstrate that roots of different apple genotypes expressed stress responses of different intensities. This was shown for the antioxidative potential, but mainly for the accumulation of phytoalexins as well as the increase in the expression of the responsible genes. Moreover, we identified indicators of ARD in apple roots on the microscopic level: browning and blackening symptoms associated with colonization of fungi (Nectriaceae) and Actinobacteria as well as reduced root hair formation. In combination with a selection of early markers at the gene expression level, they enable us to test the efficacy of ARD management measures (WP4).  One of these management approaches which we work on within WP3 would be the inoculation of apple planting materials with antagonistic or plant growth promoting endophytic microorganisms. Furthermore, the obtained knowledge will be used to develop ARD-tolerant rootstocks. First ARD-tolerant Malus genotypes were identified in phase I.

Key aspects and projects in  WP3: 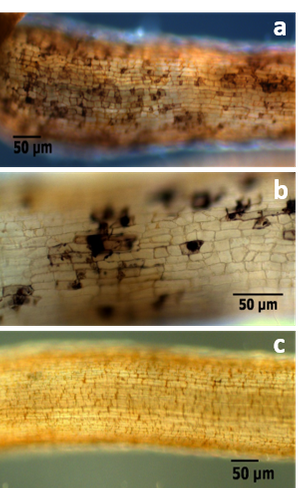 Abb. 1: Symptoms of blackening and necrosis in replant diseased fine roots of M26 apple rootstock detected by bright field microscopy: infected brown cells scattered in the rhizodermis after 28 days of cultivation (a), close up of necrotic cell clusters (b), healthy appearing part of a fine root after 25 days of cultivation (c).